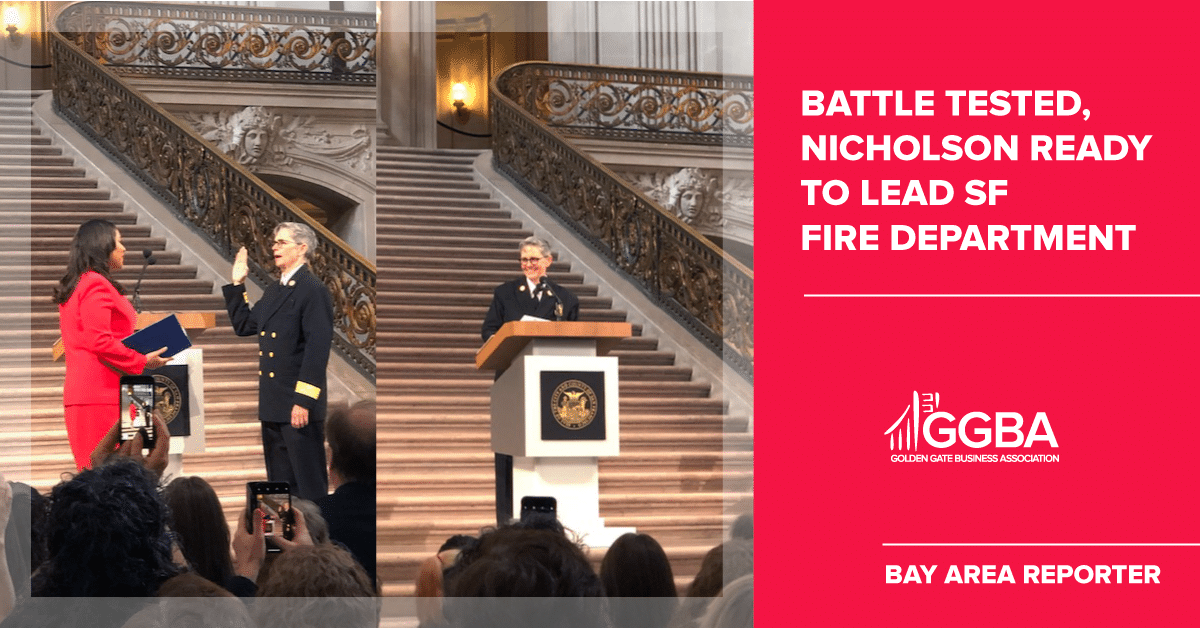 On Monday, May 6, 2019 San Francisco Mayor London Breed presided over the swearing-in ceremony of Jeanine Nicholson, who has become the Nation’s First LGBT Fire Chief. GGBA congratulates Chief Nicholson on this historic appointment.

We paid tribute to Jeanine Nicholson at our April Make Contact, and the following Bay Area Reporter article tells her compelling story:

A decade ago Jeanine Nicholson and five other firefighters survived being severely injured fighting an arson fire. She ended up with burns over 15% of her body, while several of her male colleagues suffered even worse injuries.

Then came her diagnosis in 2012 of having an aggressive form of breast cancer. She underwent a double mastectomy and 16 rounds of chemotherapy as she fought her way back to being healthy and able to return to work.

“While I wouldn’t wish it on anyone, it was an absolute learning and growing experience for me to go through that and come out on the other side,” said Nicholson during a recent interview with the Bay Area Reporter at the fire department headquarters. “So going through something like that certainly helped prepare me, you know.”

Those experiences have steeled Nicholson, 54, known as “Neen” to her friends, for the latest challenge she will confront. Monday, May 6, Mayor London Breed will swear in Nicholson as San Francisco’s next fire chief, overseeing a department with more than 1,700 personnel.

Park Smart! If you love it, don’t leave it

Join us as we highlight member business Ladle & Leaf. Owner Jen Sarver has been helping deliver her unique creations to downtown San Francisco for